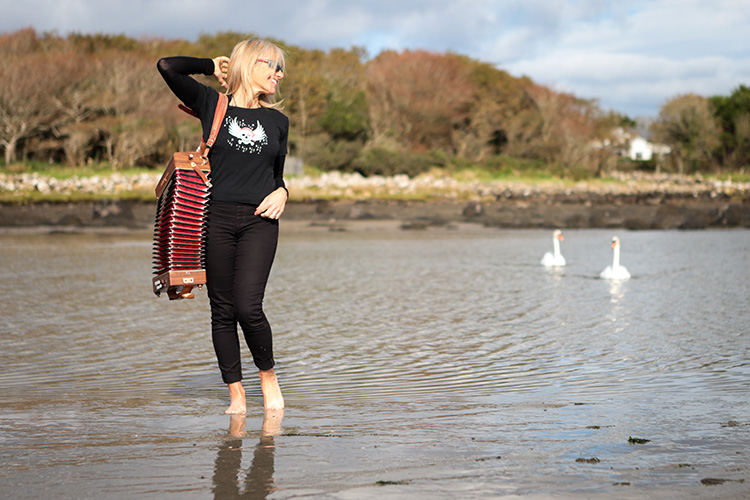 Sharon Shannon, the button accordion player from Co Clare, has recorded and toured with a who’s who of the global music industry, including Bono, Sinead O’Connor, Jackson Browne, John Prine, Steve Earle, The Chieftains,  The Waterboys, Willie Nelson, Alison Krauss and Shane MacGowan.

Sharon grew up in a rural community and was part of a family that all play musical instruments and traditional Irish music. Her career took a massive upward trajectory when in the late 80s she was asked to join seminal band The Waterboys.

Her subsequent debut album was released worldwide and was to become the biggest selling record by a traditional artist in Ireland.

Among the many awards she has received including Hot Press and MeteorAwards.  She received an IBAM Award in Chicago in 2015 for her ‘unique contribution to Irish Music’. Her music has been featured in several Hollywood movies and she also played a cameo role in the Neil Jordan movie Ondine.

In 2017, Sharon released her 10th studio album Sacred Earth. A groundbreaking album once again from Sharon. Produced by Justin Adams, the album mixes Irish music with African and blues and features celebrated African Musicians Abass Dodoo and Seikou Keita as well as special guests including Finbar Furey and Alyra Rose.

A true musical adventurer and a master of her craft, CQAF is proud to welcome Sharon to our 21st Festival.